Imagine a place of absolute quiet…  The only sounds are the stir of a light breeze and the quiet drawing in and out of tiny ocean waves from crystal clear turquoise water.  You are standing on a nearly endless stretch of white sand.  A brilliant blue sky with puffy white clouds hangs overhead and coconut palm trees provide ample shade and cover from a warm and penetrating sun.  Welcome to Dravuni Island, Fiji.

We awoke early and were on the tender shortly after 8am in the morning.  As the lifeboat made its way towards the small island, barely more than a square kilometer in size and with only about 200 inhabitants, our first thought was that our cruise ship, with nearly 2,000 passengers would crush this poor little island and leave nothing but a tangled heap of tourist devastation in its wake.  Very quickly though, we realized that today would be different. 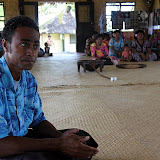 Our Guide Introducing Us To The Practices and Customs of The Village – Suva, Fiji
View at Picasa 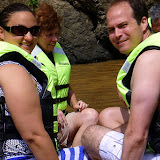 Relaxing On The Bili-Bili or Bamboo Raft – Suva, Fiji
View at Picasa 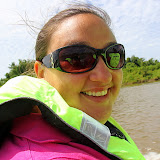 Heading Up The Navua River in A River Canoe – Suva, Fiji
View at Picasa 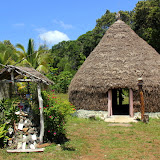 Dawn Princess at Anchor in the Bay – Lifou, New Caledonia
View at Picasa

Normally, tiny ports of call suffer from cruise ship chaos because all 2000 people try to go to the one museum/gift shop/token place to see at the same time or zip around the island on the few buses, taxis, and other transport options available to reach any photographic place of importance and strain amongst 500 people attempting to see and capture pictures of the same thing.

Here in Dravuni, the rules are relatively simple.  1)  The only mode of transportation on the island is by foot or by 4 passenger fishing boat.  There are no cars of any kind on the island — in fact, there are no roads at all.  2)  No organized tours, no ship shore excursions.  3)  No restaurants, no bars, no grocery stores, no internet, no banks, no ATMs, no cell phone service.  4)  No nudity permitted on the beach (Inappropriate in Fijian cultural traditions).  5)  Keep Dravuni clean.  Follow the rules and the rest of the day will be one of complete enjoyment. 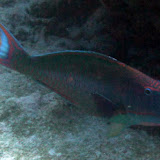 All The Colors of the Rainbow – Noumea, New Caledonia
View at Picasa 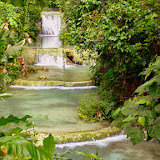 A 5 Tier Waterfall on the Path to the Top at Mele Cascades – Port Vila, Vanuatu
View at Picasa 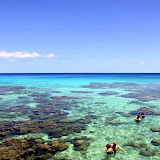 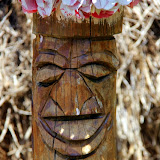 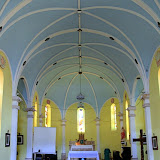 As we walked along the jetty to the beach and the main village of the island, we found a beautiful beach, turquoise water, and about a dozen or so stalls setup with all that one would need for the day.  Food stands offered nothing but local fruit, grown on the island.  Drink stands offered green coconut juice and Fiji Bitter (beer).  Not a soda to be found on the island.  A number of huts offered oceanside table or chair massages (15 minutes for F$10, 25 minutes for F$20) and a few had shirts, sarongs, and small hand crafted souvenirs.  Beyond the stalls, there was a open air hut where a local band was playing music and kava was available for anyone that would like to partake as part of the welcome to Dravuni.

The village lay just beyond this “visitor’s center” and along with a small pre-school and primary school was a church and the homes of the villagers.  This area was open to all, and at the same time respected by the passengers as a place where people lived and not as a tourist attraction.  To the left and right of the stalls, was sand to both ends of the island and a single footpath that led to one of five destinations on the island. 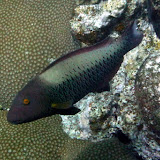 Fish Of So Many Sizes and Colors – Noumea, New Caledonia
View at Picasa 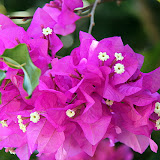 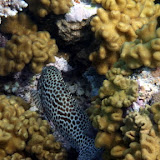 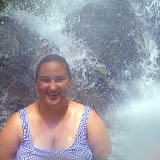 Standing Inside of a Waterfall – Port Vila, Vanuatu
View at Picasa 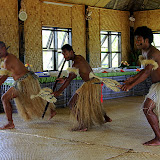 While Natalie found a nice spot on the beach to set up our towels, backpacks, and to relax in the sun, Darin took a walk on the footpaths to one of five possible destinations on the island.  Shaped like an oval, the island is widest west to east, and thinnest north to south.  One footpath took him to the northern most point on the island (5 minute walk) and to yet another beautiful, but this time completely empty, beach.  After exploring here for a short while, he continued on the footpaths to the western end of the island (10 minute walk) and encountered little more than trees, flowers, plants, and a spider the size of his hand on a delicate web stretched between two small trees.  Up to this point, he had only encountered about 3 other people on the entire walk.

From here, he took the footpath to the eastern end and also the highest point of the island (20 minute walk) and was granted expansive views not only of Dravuni from above, but of another 15-20 smaller islands off in the immediate vicinty of the island.  After this stop and short detour to the north brought him to other end of the empty beach, he returned to the south beach and back to where Natalie had set up the day’s camp. 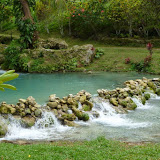 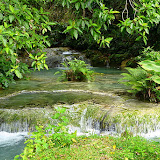 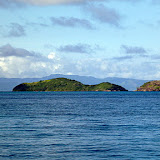 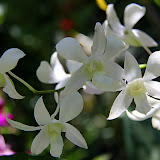 Orchid At The Garden of the Sleeping Giant – Port Denarau, Fiji
View at Picasa 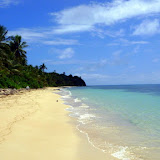 By now, the sun was operating at full intensity, and a cool dip in the ocean was just the ticket.  We spent another couple of hours on the beach, sharing our time between the sand and the water and just enjoying this place that could easily be called a tropical paradise.  As the sun reached its peak and the beach began to reach its maximum capacity, we slowly made our way back to the tender jetty to return to the ship.  We stopped along the way at the preschool and got to see the local kids learning their lessons.  A few minutes later, the lifeboat was at the small dock and it was time to return to the ship.

Today was a great day.  It was a quiet day, a relaxing day, a day to just take it all in and to reflect on the amazing opportunities and experiences we have shared thus far on the journey.  We are truly appreciative to have the chance to be here and to do all that we have been able to do in New Zealand, Australia, the South Pacific, and Bali.  Thanks Dravuni, for reminding us that sometimes the most basic and simple pleasures in life are those that mean the most.